Microsoft Office and Vista are Available in Sinhala Now

MS Vista & MS Office 2007 are Sinhala enabled now. It is not Complete version of Vista or Office. It's User Interface modifications. You have to download the language pack.
Following links use the download it. 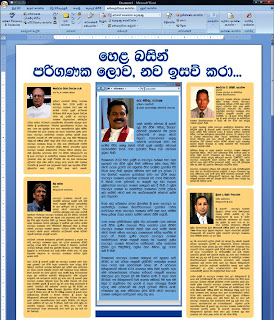 Posted by Achira at 9:46 AM No comments:

What's New for Developers in Office 2010?

Posted by Achira at 1:25 PM No comments:

The Serial ATA, or SATA, computer bus is a storage-interface for connecting host bus adapters to mass storage devices such as hard disk drives and optical drives. The SATA host adapter is integrated into almost all modern consumer laptop computers and desktop motherboards.

Serial ATA was designed to replace the older ATA (AT Attachment) standard (also known as EIDE). It is able to use the same low level commands, but serial ATA host-adapters and devices communicate via a high-speed serial cable over two pairs of conductors. In contrast, the Parallel ATA (the re-designation for the legacy ATA specifications) used 16 data conductors each operating at a much lower speed.

There are Three generations of Serial ATA. But in here we discuss about only two Generations. Because, Second generation of SATA specifications were just release.

First-generation SATA interfaces, now known as SATA 1.5 Gbit/s, communicate at a rate of 1.5 Gbit/s. Taking 8b/10b encoding overhead into account, they have an actual encoded transfer rate of 1.2 Gbit/s. The theoretical burst throughput of SATA 1.5 Gbit/s is similar to that of PATA/133, but newer SATA devices offer enhancements such as NCQ which improve performance in a multitasking environment.

During the initial period after SATA 1.5 Gbit/s finalization, adapter and drive manufacturers used a "bridge chip" to convert existing PATA designs for use with the SATA interface. Bridged drives have a SATA connector, may include either or both kinds of power connectors, and generally perform identically to their PATA equivalents. Most lack support for some SATA-specific features such as NCQ. Bridged products gradually gave way to native SATA products.

Soon after the introduction of SATA 1.5 Gbit/s, a number of shortcomings emerged. At the application level SATA could handle only one pending transaction at a time—like PATA. The SCSI interface has long been able to accept multiple outstanding requests and service them in the order which minimizes response time. This feature, native command queuing (NCQ), was adopted as an optional supported feature for SATA 1.5 Gbit/s and SATA 3 Gbit/s devices.

Given the importance of backward compatibility between SATA 1.5 Gbit/s controllers and SATA 3 Gbit/s devices, SATA 3 Gbit/s auto negotiation sequence is designed to fall back to SATA 1.5 Gbit/s speed when in communication with such devices. In practice, some older SATA controllers do not properly implement SATA speed negotiation. Affected systems require the user to set the SATA 3 Gbit/s peripherals to 1.5 Gbit/s modes, generally through the use of a jumper, however some drives lack this jumper. Chipsets known to have this fault include the VIA VT8237 and VT8237R south bridges, and the VIA VT6420, VT6421A and VT6421L standalone SATA controllers. Sis’s 760 and 964 chipsets also initially exhibited this problem, though it can be rectified with an updated SATA controller ROM.

Serial ATA International Organization (SATA-IO said that it had finally approved the Serial ATA revision 3.0 specification that doubles bandwidth and also introduces a number of technologies that improve efficiency of the interconnection technologies.

“As speed becomes critical to today’s storage, the SATA Revision 3.0 specification doubles the maximum transfer speed enabled by technology, paving the way for a new generation of faster SATA products. SATA-IO members will be able to design for their customers products with the speed they crave, without compromising the quality and performance they’ve come to expect from SATA technology,” said Knut Grimsrud, SATA-IO president and Intel Fellow and director of storage architecture.

The Serial ATA 3.0 sports 600 GB/s peak bandwidth as well as numerous critical features that enhance efficiency of the technology:

The new specification is backward compatible with earlier SATA implementations, and maintains the low cost and low power for which the popular storage interface is acclaimed.

According to analyst firm IDC, more than 1.1 billion SATA hard drives have shipped from 2001 through 2008. Last year, SATA captured more than 98% of internal hard disk drive shipments, demonstrating that SATA technology is now used in the vast majority of desktop and mobile PCs. Additionally, the technology is increasingly being used in other types of devices, including optical disk drives, solid state drives, servers and external storage systems. SATA implementations are also making inroads in the enterprise market.